Thank you for your interest in Cottage by Design. My products are made by me, by hand, one at a time with attention to detail. Being a "cottage" business, I am able to give you exactly what you need. It's a new way of shopping... a customized experience that precisely provides what you are looking for. Get the right item, in the right fabric, with the right specifications. I take great pride in what I do. My goal is to meet or exceed your expectations. I welcome custom orders. Feel free to contact me with any questions you may have. I look forward to us building a rapport... 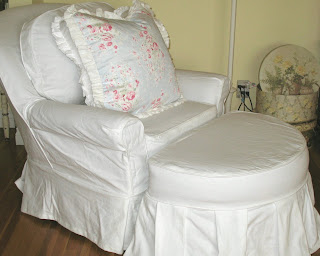 I love them because they can be taken off
and washed...a necessity for most families with kids, pets, or a
casual way of life. Who wants to be worried about
keeping a house pristine when there's living to do?

Breathe new life into your home with a custom fit, custom designed
slipcover just for you. Whether you like clean lines and
cording or prefer a softer look with ruffles and gathers,
I'd be happy to make it for you.

This little chair and ottoman were made just this week. Jenie, a
lover of shabby chic style and the proud mother of two adorable
doggies (enter dirt) wanted white slipcovers with clean lines and
a pleated skirt. Super fun!

Give me a call or email me with any questions you may have...
Posted by Trish Banner 3 comments:

Bedding for my sister 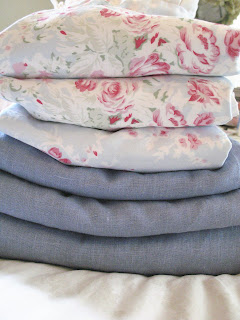 My sister Connie asked me to make some bedding for her master bedroom. She and her husband Jim have three little ones and wanted a sanctuary that would be light, airy, and soothing. After showing her some pictures of the floral fabrics of Pine Cone Hill bedding, she gave the OK for me to go ahead and surprise them.

When starting over in your bedding, I think it's a good idea to get all new "guts." Feather and down are my preference because they are so much more cozy than fiberfill. For Connie, her foundation of new insides included:

Now that she has a blank canvas...the fun stuff comes next. Her palette of colors was based on a solid linen. She asked for a blue color that "looked like Dad's oxford cloth shirts." To that, we added a beautiful rose print with a pale blue background to pull in the feeling of the bedding from Pine Cone Hill. Add to that generous amounts of pure white and we were set.

The picture below is of the 3 extra large square pillows.
They feature lots of ruffles in white and a soft poplin print of cabbage roses on a pale blue background. They are constructed with three sides and a zipper opening for easy removal. All seams are overlocked. 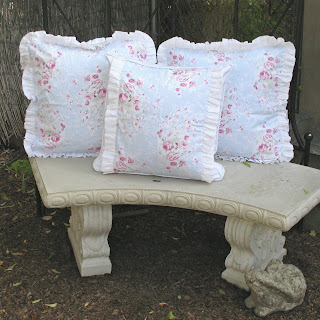 The next image is the two king-size pillows that will go in front of the above set. They are made with 100% pure linen in a gorgeous soft blue. Although they are made of only one fabric, the details of rouching, top stitching, and embroidered monogram give these pillows an understated elegance. 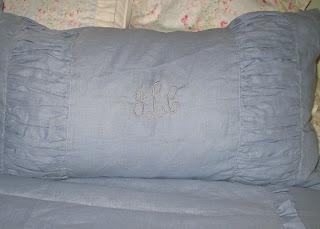 And pulling it all together... 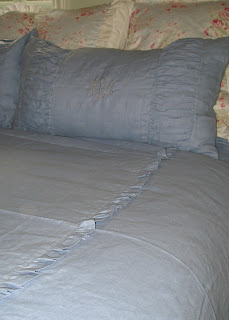 Notice the detail on the duvet cover of the repeating ruffles.
Posted by Trish Banner No comments: 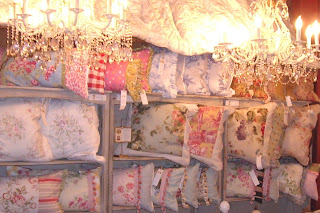 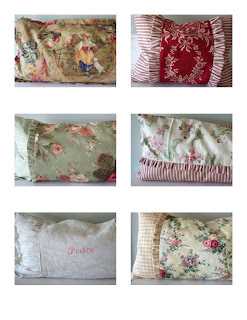 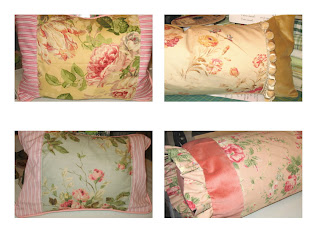 Hey there everyone! Just wanted to add some pictures of pillows I've been working on to give you some ideas about what can be made. I have a TON of fabrics that I've collected over the last 5 or so years. If you are looking for a certain color, style, size, etc. , give me a call and we can come up with something original that works for you.
Posted by Trish Banner No comments: 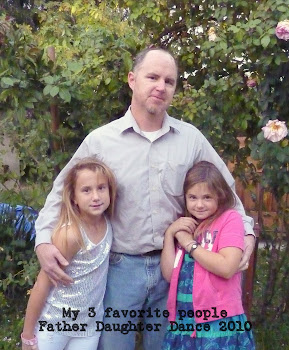 greetings from our frenchy 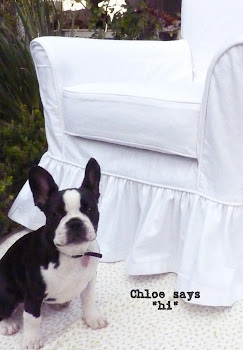 My adorable and supportive husband who makes me laugh every day!

Nothing says "welcome" better than a cozy place in the garden to sit and visit.